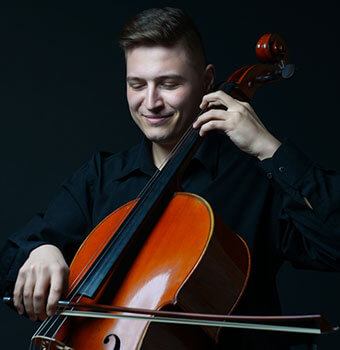 Young cellist Ștefan Cazacu (25) has a visiting card that represents the basis of a successful career: a complex education achieved in his early life in a family of famous musicians, academic musical studies attended in Bucharest (Romania) and in Vienna (Austria), numerous prizes at various national and international competitions, performances (as soloist) together with all symphonic orchestras in Romania, recitals in The Netherlands, Israel, Austria, Hungary, Germany etc.

His story in the realm of music is written along together with his travelling companion – a collection cello played by Ștefan Cazacu since he was 15. The instrument is a precious gift received from his father, Marin Cazacu (one of the greatest cellist in Romania), and it was produced over 100 years ago (in 1917), in Turin, Italy, by the string-instrument maker Georg Ullman. The costliest instrument Georg Ullman ever produced was auctioned for Eur 43,000!

Under the Guidance
of Great Cellists

Born in 1994, Ştefan Cazacu started his musical education from the age of 6, together with his father, the well-known cellist Marin Cazacu. He graduated from the Romanian National University of Music, Bucharest, and he took his Master degree at the same academic institution (class of another important Romanian cellist: Răzvan Suma).

Due to an Erasmus grant given by the European Union, he completed his Master studies at the University of Music and Performing Arts in Vienna, Austria – one of the most important worldwide institutions in the field, with a history older than 200 years (since 1817).

Ştefan Cazacu has participated in Masterclasses taught by well-known cellists, greatly appreciated on the international music stage – such as: Reinhard Latzko, Wolfgang Boettcher and Frans Helmerson.

He has also performed solo recitals in Romania, the Netherlands, Israel, Austria, Hungary, Germany, Bulgaria, North Macedonia, Serbia and has played as soloist  with all symphonic orchestras in Romania and also with other symphonic orchestras such as: the National Philharmonic in  Kishinev (Republic of Moldova) and the Alicante Youth Orchestra (Spain).

In October 2018, together with his father, cellist Marin Cazacu, and his sister – violinist Iulia Cazacu, he had his first Romanian nationwide tour: Three Times Classic, an event  in which his mother, flutist Constanţa Cazacu, was a special guest.

Since 2011, Ștefan Cazacu has constantly collaborated with Violoncelissimo, an ensemble created by his father, Marin Cazacu, in 1992.

Violoncelissimo gathers together between 4 and 100 cellos, a flexible formula depending on the event. Besides Violoncelissimo, Ștefan Cazacu has performed both abroad, in important cities like Brussels or Washington DC, and in Romania, in Bucharest, Iași and Timișoara.