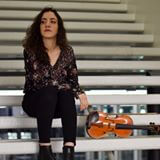 Born in 1999 in Rome, Alice Notarangelo graduated in 2017 with Professor G. Crosta with highest marks at the Conservatorio “S. Cecilia” in Rome.

She studied with Oleksandr Semchuk at the Accademia Pianistica Internazionale di Imola “Incontri col Maestro” and she currently studies with Professor Marco Rizzi at Conservatorio della Svizzera Italiana in Lugano. Furthermore she attended several masterclasses with R. Gonzalez, A. Company and L. Hagen.

She has been founding member and first violin of the Quartetto Elsa from 2015 to 2019, admitted from 2016 to the Master Course in String Quartet studies at the Accademia Stauffer di Cremona. For two years she has been the Concertmaster of the “JuniOrchestra” of the Accademia Nazionale di “S.Cecilia” with whom she participated to several and important festivals, working with world renown artists such as A. Pappano, M. Brunello, S. Mintz, F. Dego etc.